Harvest season.  Those two words hold such power.  Do you ever wonder how the earth continues to provide so much?  I do.  When you stop to think about it, it’s really a miracle.  It’s September, and all around me is the evidence of nature’s bounty.  Wheat harvest just ended on the Imperial Stock Ranch, and we’re busy gathering everything that matures in its time:  berries, vegetables, fruits, grains.  First one, and then another, ripens to nature’s clock.

In addition to the things we plant, we talk a lot around here about “indicator species.”  If we are keen observers, naturally occurring indicator species, plants or animals, tell us if we’re doing a good job for mother nature on the land, or a poor job.  For example, when a species of plant or wildlife reappears after a long absence that’s a good thing. Like the Great Basin Wild Rye that used to flourish in the west. This plant was almost eradicated by over use and is now coming back strong in the valleys on the ranch.  Beaver dams are another example.  The beavers were gone from our creeks since the mid 1960’s.  We hoped that as we continued our conservation efforts and improved agricultural practices, the right habitat would be created for their return.  They’re back, and it’s amazing.  They came on their own.  Perhaps the greatest victory, is the return of salmon to spawn in our creeks in record numbers.  That’s a story we love to share.

A species showed up recently at the ranch headquarters we hadn’t seen here before, and we’re not quite sure what to think.  In the last 2 weeks, wild turkeys have appeared.  At first we were surprised and really enjoyed that we got to see them, but they now appear to be permanent residents.  They wander through the alfalfa fields, around the shop and grain storage facilities, mingle with groups of lambs, graze the lane in front of the yarn shop, and now even our yards are home for them, including roosting on the white fences around the pool!  Is this a good thing?  Maybe.  However, what if they’re still around when Thanksgiving gets here? 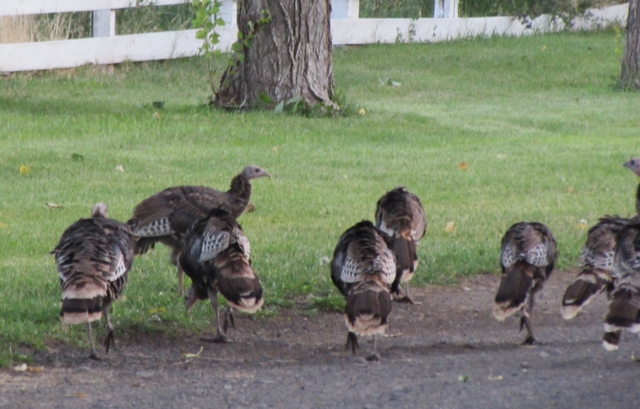 There is so much excitement right now, as we prepare for the “launch party” for our Imperial Collection by Anna Cohen apparel line.  It will be at Mercantile in Portland on September 19th, from 2 to 7 p.m., and we’d love to see you there!  It will include not only our beautiful apparel, but home goods as well.  Come and get a first look at an exciting part of Imperial’s future.

Don’t forget to submit your design entry for our contest by September 15th. The deadline is fast approaching!  I will be presenting at Oregon Flock and Fiber September 27th and 28th, for the first time.  Come by and say hello.  And we’ll soon be hosting another great Vogue Knitting Destination Experience workshop with those fun personalities from New York!  October 3rd through the 6th, you won’t want to miss working with designer and teacher Josh Bennett for this extraordinary workshop.There may be a couple spots remaining. Email vkdestinations@sohopublishing.com to find out more.

And then there’s the Trailing of the Sheep Festival in Sun Valley/Ketchum, Idaho.  We will be doing a couple presentations at this festival, one I’ve always wanted to attend.   All these fabulous fiber folks and festivals are spicing up our fall for sure.  Along with those turkeys!