If you listen to old timers, they’ll give you some advice about sheep. It usually goes something like this: “Sheep are always looking for a way, a place or an excuse to die!” Or “Yes, sheep are just one crisis after another!” They exaggerate of course, but I have to tell you about a sheep that has consumed a lot of my life the past few months. Some of you who have visited the ranch recently have had the chance to meet her. She proves these “doubters” wrong! 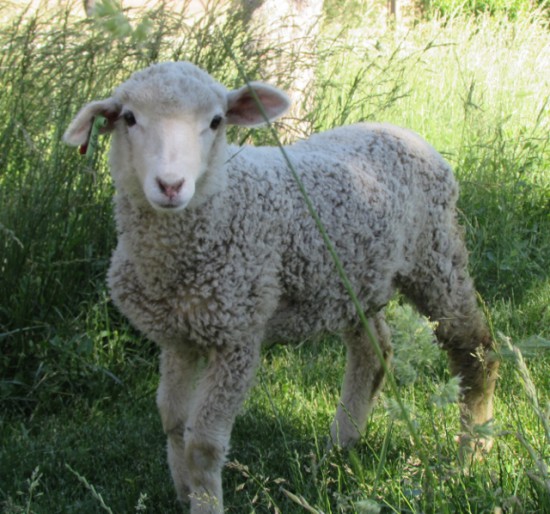 Sometime during lambing in February, a ewe and her twin lambs (1 boy and 1 girl) got turned out into a mixing group up on the hill. And as the ewes pushed and crowded at the feed bunks where they dine on alfalfa hay, the little girl must have gotten pinned against the bunk and injured her right front shoulder. We try to watch out for that, but sometimes an accident happens. Her injured shoulder developed an abscess, so as we turned out all the other sheep onto the range at the end of lambing, she and her family were sorted out and moved to the orchard where we could continue to monitor her progress and treat her as needed. Eventually, she was well, but two complications had developed. The twin male lamb had been taking all of the ewe’s milk, since he kept up with her better as they moved through the pasture, and could push out the weaker lamb with the wounded leg. And the little ewe lamb refused to use her right front leg, even after the wound was healed. She continued to walk around essentially on 3 legs. I had begun giving her a bottle of milk to help her grow and stay strong enough to compete with the other lamb. After a month in the orchard with constant care, they graduated! We turned them out into a bigger group of sheep that was still close in where we could continue to monitor her progress.
The next morning I went out to do chores, and my little lamb was lying down and couldn’t get up. I mean, could not stand up at all! Now she had been standing up and walking around the whole time. This was a completely new development and so perplexing, frustrating and heart breaking all at once. I helped her to stand up, and could see after a few minutes of examination that neither back leg was functioning. I went and got Dan so we could evaluate her together. She had no control of movement in her hips or back legs. This was a total mystery. We began researching what the problems could be, getting evaluation and began treatment. Primarily, that meant I exercised her 7 to 10 times per day. Moving her legs, picking her up, changing positions, we began her physical therapy routine. I built a sling where she could be suspended and eat and drink from a normal position, as well as have some weight bearing with support. She was completely dependent on us for everything. We moved her from sun to shade and shade to sun, depending on time of day and temperatures. We moved her to be near her family and other sheep, gave her the best of feeds and fresh water often. We treated her with supplements and continued her PT.

Most animals, and some will say, especially sheep, would have given up long ago. But this little lamb had so much spirit and desire. She never quit trying to get up on her own. She would hear your voice and excitedly cry out and fight to get to her feet. She gratefully accepted everything you brought her, eating with an incredible appetite. We all watched with hope, but also with the experienced perception, that usually they will never get up again on their own. For 5 weeks, this was my routine with her. And then one day as she fought to get to her feet, she made it. She made it. It brings tears to my eyes to write this. She actually got up on her own, and began to take a few steps. She got stronger and stronger, until now, another month later, her back legs are functioning normally and she can run after the other lambs. Somehow I just knew that as long as she was trying so hard, I just couldn’t give up on her. She’s been such a great example of will and spirit, that can make anyone try harder. Never give up.