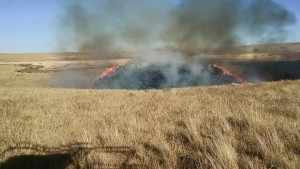 One thing we live with this time of year in our dry desert country, is the fear of fire. And fear is the right choice of words. For the last several years, we have fought fire, but not on our property. The last fire that burned on us was four years ago, when a burning trash pile got away on a neighbor’s place, and crossed onto us.

So one afternoon a couple weeks ago, Dan and I were driving home from Portland when my cell phone rang. It was the yarn girls reporting there was fire on the ranch. A million questions jumped into my head immediately, but I also knew they needed to get off the phone and do what was necessary. We got the barest details that it started with one of the combines, harvesting in the wheat fields, and was burning toward the headquarters. We were 3 hours away, and there was nothing we could do except drive. We knew what everyone would be doing, that our crew would mobilize immediately, and that help would be coming from all the country around us. It couldn’t have been worse conditions — 100 degrees, bone dry and high winds.

Scott was running the combine, and as soon as he saw smoke, he called Blaine. Blaine sounded the alarm by calling the headquarters, where the phones are manned by the Imperial Yarn girls. He said, “We got a fire. Call everybody.” We keep a phone list specifically for firefighting with all the numbers to call. These aren’t fire departments. These are neighbors with flatbed pickup trucks that have water tanks and hoses on them this time of year, or a road grader or big caterpillar for blading/dozing fire trails. Or they might come in with a big tractor and disc to start plowing under your crop in order to create a fire trail. Keelia took charge at the yarn shop, telling Maria to man the phones. She sent everyone else to their homes to change clothes and meet back at the barn to distribute gear. Off they raced.

Meanwhile, as soon as Scott called Blaine, he parked his combine upwind, where he felt it would be out of danger, and ran for his water truck. We keep a water tanker set up to fight fire parked at every field where a combine is working. He tried to douse the fire immediately before it could get any momentum, but the wind was whipping it up so fast, it grew out of control too quickly. Michael showed up to take over Scott’s water tanker, and Scott went after the road grader, to start blading fire trail. If you can get ahead of it and prepare a fire break, then when the fire gets there, and there’s no fuel, you have a chance to knock it down. Blaine knew Tom and Michael would be working the fire with water tankers, so he went for additional farm equipment to start cutting a fire trail through the wheat ahead of the fire, with the disc. He can clear a path about 30 feet wide in one pass.

It only took about 20 minutes from the time the call came in, for the girls to get to their houses, change clothes, jump into boots, and get back. Just that quickly, neighbors were pouring in and establishing a fire line. Tangie brought her boys back with her, and they teamed up with Keelia to haul hoses and sprinklers and start soaking down all the structures — those beautiful old historic buildings that many of you have toured here at the headquarters. Tangie joined Tom to run the hose on his fire truck, and they headed to the far west side of the fire. Once they had sprinklers going on all the buildings, Tom and Tangie’s boys headed to the edges with backpack sprayers full of water to work behind the water tankers. Keelia remained on the fire line near the headquarters, where she could direct incoming help. 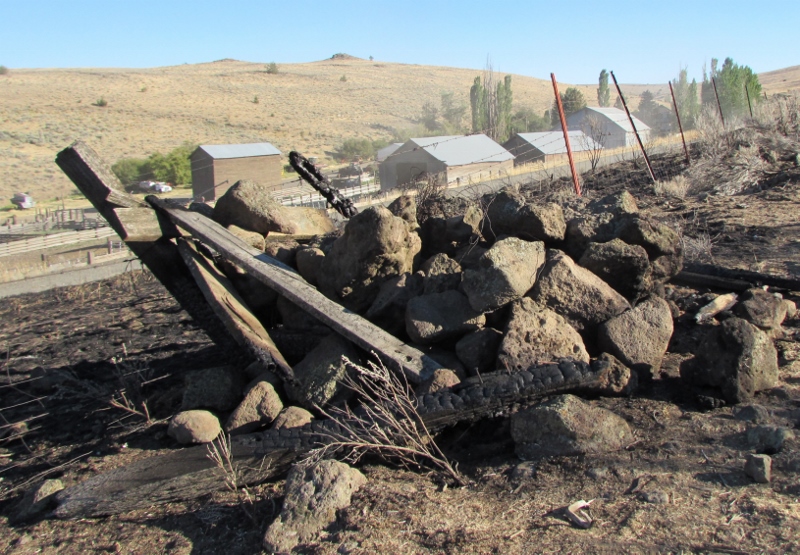 I asked Tangie who hadn’t been on a fire before, what she was thinking. She said, “it’s instant fear.” When she headed for her house, she could see smoke coming over the ridge. But what really surprised her, was the speed with which the fire can move. By the time she changed and raced back, the flames were already across the ridge, down the slope and burning right at the road alongside the headquarters. People were fighting it all along the road, trying to stop it from jumping across and threatening the buildings. She jumped in with Tom, and they headed to the west side with their tanker. Her role was to start the motor and run the hose, and she was feeling a lot of anxiety to get it right. She couldn’t believe how fast the flames were rolling at them, and said you couldn’t see for the smoke. They finally jumped into the truck and drove through the flames to get into the black where the fire had already burned, working on the fire from the back side. The biggest impressions the fire experience made on Tangie, was how fast the fire can blow up and how fast all the neighbors arrive. We’re not in a fire district, so we rely on each other. As Dan puts it, your strike force lives across the fence line.

Tom and Tangie have been on the Imperial Stock Ranch for 2 years. She said she met people she’s always heard about, but never seen. She saw them all that day! When fire strikes, everyone turns out to help. Working together in times of crisis, strengthens the bonds of our small community. We average about 1 fire every 3 to 5 years on the Imperial Stock Ranch, but we fight fire every year on somebody’s place. We’re very fortunate there’s never been any serious injuries nor loss of livestock or permanent structures, other than some fencing. We’ll take those blessings.