We had just a bit of slack time around here between harvest and the coming fall seeding and roundup activities, so the boys worked in “fix up” chores here at the headquarters. They’ve been replacing broken or weak boards on the old fences and corrals, repairing gates, fabricating new parts and hanging the giant doors back onto the old equipment shed where a recent wind storm blew them off. One thing that really needed done, was new paint on the historic domestic buildings. Let me clarify how the headquarters are laid out, especially for those who have never been here. (The Imperial Stock Ranch headquarters complex is designated a National Historic District.) 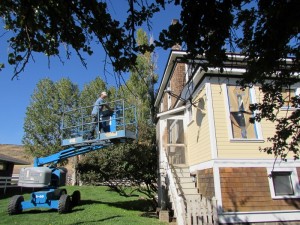 The headquarters complex is 22 acres in size with a rectangular layout, and the long dimension lying north/south along Hinton Creek. The south end is where the “domestic” portion sits, comprised of the Hinton House (home of Imperial Yarn!) and its associated outbuildings: Servants’ Quarters, Ice House, Smoke House and Old Garage. It was once surrounded by an Orchard, which still remains, but only on the north, as the south portion was removed in the 1950’s when they constructed a swimming pool for Mary Ward’s rehab following a head on car crash, and then later built the single story ranch house we live in today. (Note: All italicized structures/resources are considered of historic significance.) 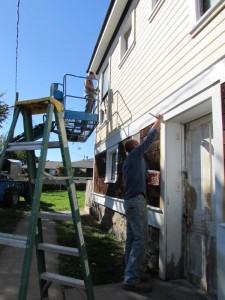 Going north from the Orchard, we quickly transition to the “agricultural” portion where two companion buildings are situated, the Cookhouse and Bunkhouse. The Cookhouse used to be two stories, and served as both bunkhouse and cookhouse, but caught fire in the 1930’s and was destroyed. As they rebuilt, they created two separate structures, one as a cookhouse and the other as the bunkhouse, placing it where the original blacksmith shop had been located. The Blacksmith Shop had become obsolete as engines allowed tractors and trucks to replace horses and wagons. West of the Bunkhouse is the Round Corral, the oldest structure here, and still an important part of ranch work. Going north from the corral, on the west is the main Barn, and on the east is the Shop. Everyone who visits loves the old barn, and agrees it really takes you back in time with its collections of old gear, hung in place. A series of fencing and partitioned pens goes right down through the middle of the agricultural portion of the complex, with these structures forming the frame for working areas used for sorting and holding livestock as needed. 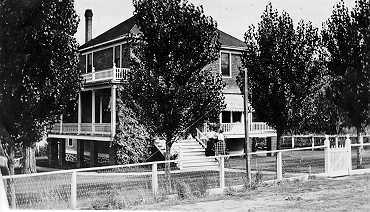 Continuing north, next are the Shearing Shed and a companion structure we call the Machine Shed, originally part of the shearing facilities, located on the west and the old Granary on the east. And on the northernmost end of the headquarters, is a large series of pens for cattle, associated smaller sorting pens, alleys and scales for weighing livestock, all located on the west, and the lambing facilities located on the east. What’s of note, is that every single structure at the headquarters is still in use and serves an important role, most serving the same function they have for more than a century. It’s a tribute to the original planning and building, and to our dry desert climate that preserves the wood!

Not only is it important to maintain these buildings and facilities because we still use them, but also because of their historic significance. We value our past and the lessons it teaches, and these historic treasures can never be replaced once lost. The Hinton House, Servants’ Quarters, Ice House, and Smoke House all were in bad need of new paint to maintain them, especially since the severe hail storm that hit a couple summers ago. Dan and I felt maybe this was the last big thing we would get done here in our generation, for historic preservation. So with everyone’s help, the paint job is almost complete. And these old structures look so beautiful, it warms your heart. The only thing I didn’t count on, was how shabby they would make the fences look! Guess we better buy more paint!

P.S. There are some great historic photos of the Hinton family and Imperial Stock Ranch online as part of a school district Wasco county history page.