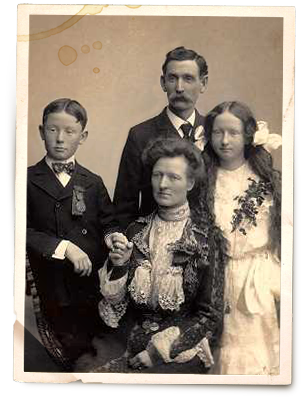 Imperial Stock Ranch was founded in 1871 by Richard Hinton, and for much of its history was the largest individually owned land and livestock holding in Oregon.  While the ownership has changed over the decades, the ranch has operated continuously, and has remained true to its history and heritage.

The Imperial Stock Ranch is the only ranch in Oregon recognized as a National Historic District that is still in operation, and still utilizes many of the original structures and facilities built in the late 1800’s and early 1900’s.  Dan and Jeanne Carver, the current ranch owners, are proud to carry on the traditions, sustainable practices and operations started by Richard Hinton more than 145 years ago.

Richard Roland Hinton was born in a wagon in 1852 as his family traveled the Oregon Trail on their way to settling in Lane County.  He grew up seeing the land farmed and fenced, and soon decided that it was too crowded for him.  At the age of 19 he headed to the east side of the Cascade Mountain Range with his packhorse and six-gun, taking up a homestead claim on what would become Hinton Creek in southern Wasco County.  His first home was a dug-out cave in a creek bank.

Hinton started ranching and a year later married Mary Emma Fitzpatrick. They lived together in the dug-out where she gave birth to their children, James E. in 1874, and Lillian in 1876. Together they struggled to make it in tough conditions, marginal country, a harsh climate and isolation. It was twelve long years before they received title to the first piece of land, and where the following year Mary Emma died. Richard Hinton persevered, planned and built for permanence.

During the early 1880s as the Imperial Stock Ranch was increasing its land holdings and quickly expanding its sheep production, the sheep industry was rapidly increasing in importance in Oregon. Wool became one of Oregon’s leading exports and sources of revenue. The semiarid regions of Oregon’s interior were well suited to raising sheep, specifically fine wool sheep. Hinton was carefully improving and expanding his flocks, importing breeding stock and cross-breeding meat and fine wool breeds which eventually led to the creation of the Columbia Sheep— an entirely new breed.  These sheep were ideally suited to the high desert terrain of the Columbia Plateau, yielding more pounds of lamb and excellent wool.  Hinton’s efforts and the Columbia breed were heavily influenced by French Merino genetics, also known as Rambouillet.   Merino sheep had been introduced in America as early as 1802, and historically, the first sheep in Oregon were Merino.  The Imperial Stock Ranch has had a long history with Merino influence in its sheep production, helping shape its wool profile.

Hinton built the Imperial Stock Ranch’s strong reputation and established its long lasting tradition for outstanding lamb, fine grade wool and high quality beef. In fact, by 1900 he had grown from a young man with a dream into the largest individual producer of wool and sheep in Wasco County — and eventually becoming the largest individual owner of land and stock in Oregon.

James E. Hinton, born in the dug-out cave on the ranch, took over for his father in 1915. He earned his own reputation as he continued to build the empire which was at that time, carrying 35,000 head of sheep (assessed number on county tax roll), more than 1,000 head of cattle and pasturing hundreds of horses. The ranch moved sheep from north of Shaniko to south of La Pine, more than a 120 mile stretch of central Oregon.

George Ward was born and raised in Antelope, Oregon, only a short distance from the Hinton ranch holdings. In the 1930’s, he came to work for Jim Hinton and proved himself a hard worker and a good sheepman. In 1945, having no children of his own, Jim Hinton gave George and his wife Mary the opportunity to buy a half interest in the ranch. Upon closing the deal, it became the Hinton-Ward Ranch and remained so until 1967 when the Wards bought the remaining half interest, all while George carved out his own reputation as a successful rancher.

In 1988, the ranch passed from the Ward family to the Carver family, who have owned it to the present day.

Richard Hinton’s dream has evolved, and today the Imperial Stock Ranch is the only privately held ranch in Oregon recognized as a National Historic District. Many of the early day facilities are still in use. The setting, history and husbandry practices are a draw for tours of varied interests. Today, Dan and Jeanne Carver are proud to carry on the traditions, sustainable practices and operations started more than 145 years ago.